Except iPhone 3GS (old bootrom) iPhone 3G and iPod Touch 2G (Non-MC models), all other idevices will get tethered jailbreak with Redsn0w until iPhone Dev Team comes up with a new exploit or way to make it untethered for all idevices.

With Turkey Day a few days off, today Apple publicly released FW version 4.2.1.  As always, ultrasn0w unlockers please stay far far away from this official firmware (and all official firmware).  Wait for the ability to create custom 4.2.1. IPSWs that don’t update your baseband!  If you’re not an unlocker, read on!

The best news of all is for owners of iPhone3G, older iPhone3GS, and non-MC iPod touch 2G.  Due to a combination of our original pwnage2 exploit, the arm7_go exploit, 24kpwn, and limera1n, your device is “just as jailbreakable as ever.”  You reap the full benefit of an untethered 4.2.1 jailbreak.

Next are the owners of all the more recent devices.  The good news there is that due to geohot’s limera1n exploit, all recent devices can be jailbroken (this will be true until Apple released new hardware that fixes geohot’s limerain exploit in the bootrom).  The bad news is that right now, the 4.2.1 jailbreak is *tethered* on all of these recent devices.  A tethered jailbreak means that each time your device loses battery power or needs to be rebooted, you must attach it to a PC or Mac to boot into the jailbroken state.  @comex is working hard on a method that may untether the 4.2.1 jailbreak, but it will require you to have your 4.1 SHSH blobs in order to use it.  No word on how much more effort it will take though (please don’t bug @comex about it!).  (We also have an alternative method that may work, but @comex’s method is much more elegant.)

ultrasn0w unlock: After redsn0w is officially released with the new Cydia and kernel patches, we’ll be able to assess the unlock situation.  It’s already looking very promising though, so expect the unlock for the 3G and 3GS to be coming this week.  The i4 unlock is taking more effort though, and no further concrete info is available about that yet.

Step 3: Back up all the contents on your phone before you start the actual jailbreak process.

Step 4: Save the SHSH blobs if you are still on iOS 4.1 or below version. !very important

Step 7. When asked for iOS firmware, point the redsn0w to iOS 4.2.1 downloaded in first step. 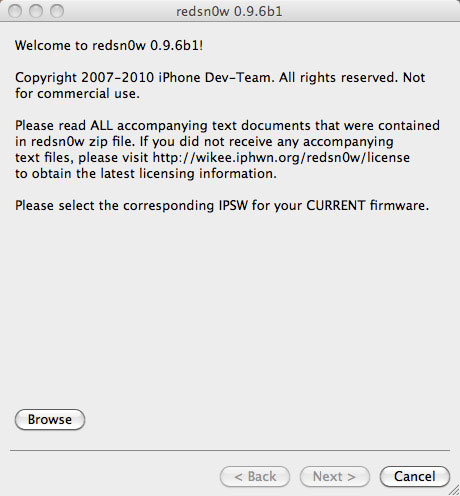 Step 8: Click on next and select “Install Cydia” option. Optionally you can also select any other option available for your idevice. 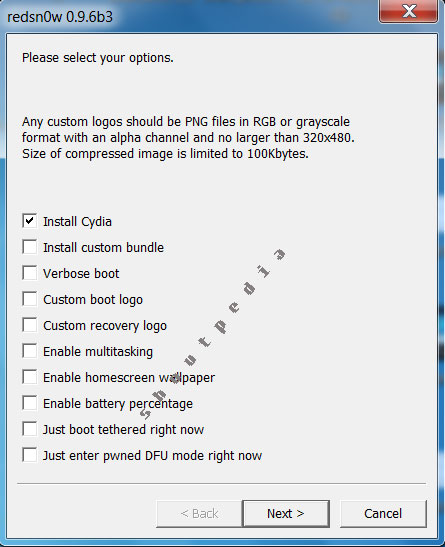 Step 9: At this step make sure that your phone is switched off and plugged into the computer. Follow the onscreen instructions to put the idevice into DFU mode.

Step 10: Let Redsn0w do its work. Once completed your phone will restart and you will find it jailbroken on iOS 4.2.1.

Now if you are on iPhone 4, iPhone 3GS New bootrom, iPad, iPod Touch 4G or iPod Touch 3G, you will have to connect it with Resnow and select the “Just boot tethered right now” option to get the jailbreaked state on every boot. 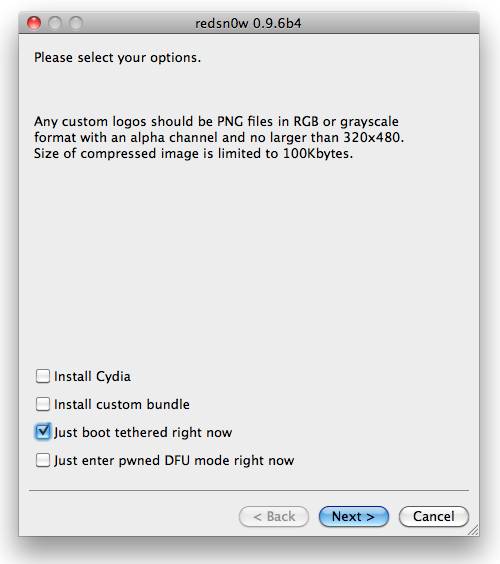