iH8sn0w has just uploaded its updated Sn0wbreeze 2.8 beta 3 version to jailbreak the recently released beta 2 version of iOS 5. Snowbreeze 2.8 beta 3 supports all idevices running on iOS 5 beta 2 except iPad 2 which is not jailbreakable yet. 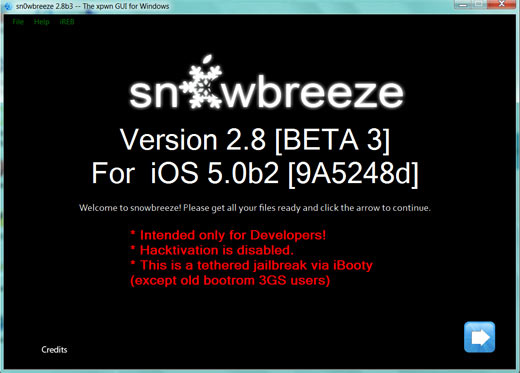 As you know iOS 5 beta 2 release is available for developers only, so we won’t recommend you to update your device to this beta release if you are not registered with Apple’s Developer Program.

Unlockers, who are not on official carriers and their devices are locked to any network, must avoid this release because they may lose the unlock ability after updating their devices to iOS 5, for which no unlock is available yet.

Sn0wbreeze is compatible with Windows OS only but if you have mac machine, you can use Redsn0w 0.9.8 version which can jailbreak both iOS 5 beta 1 and beta 2 releases on both Windows and Mac machines.