P0sixninja, an iOS hacker from Chronic-Dev.Org, who developed a jailbreak tool “GreenpoisOn” for iPad which was never released, just updated its blog about the upcoming jailbreak for iOS 4.1 to keep the users calm down.

Though nothing is mentioned about the release date of jailbreak, but these few lines will definitely raise the satisfaction level among iPhone lovers:

Although we still can’t give any details of the exploit(s) that need to be used, I figured I’d make an update here to just let you guys know that we are still working hard on the jailbreak and making steady progress. Please keep in mind that even though we have had the method for a while, there was a certain very key element that we (or rather, pod2g the great) only got working a few days ago, so it’s not like we have this packaged up and we are just sitting on it. It is being actively worked on as I type this (the loader, the payload itself, the easy to use computer-side tools, the payload, the patches, etc.) Just hang tight, it will definitely be worth it.

Yes, we still don’t know “when greenpois0n will be released” but we can explain here “what greenpois0n is” for those who are not following the updates  from last few days. 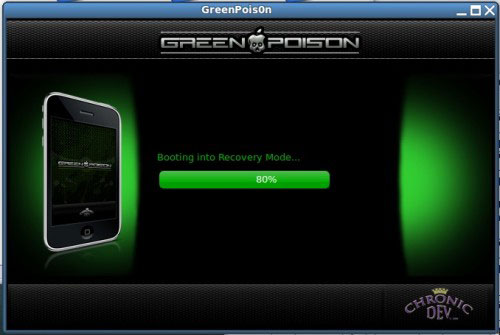 Greenpoison is not an exploit. In fact it is mere a name, like Snowbreeze or Redsnow, given to a jailbreak tool which was developed for iPad and was not released as mentioned above. First of all an exploit is found in the iOS to bypass the security that prevents the installation of third-party apps and games. After testing the exploit on different devices, it is bundled with another program to make a final toolkit for common user.

So far one working exploit has been confirmed for iOS 4.1, but other exploits are also being tested as said P0sixninja. At this time any updates about these exploits will be far too technical for anyone, who is not involved in such hacking, to understand.

Be patient and keep coming back to this blog for latest updates on iOS 4.1 jailbreak.