Yesterday a user on ModMyi Fourms posted that he was unable to jailbreak  the newly purchased iPad running on iOS 4.2.1 with Redsn0w, which is based on Limera1n exploit, and concluded that Limera1n Exploit might had been patched in newer iOS devices.

Today MusleNerd and Comex, the two key figures behind iPhone Jailbreak Tools, have confirmed that Limera1n Exploit still works on all idevices and moreover bootrom is not changed in new devices.

Here is the reply of MuscleNerd to an iPhone user over twitter:

MuscleNerd: @Tweror the 2 times Apple has fixed bootrom so far, the bootrom version # changed too. This is still showing 574.4, so I wouldn’t worry. 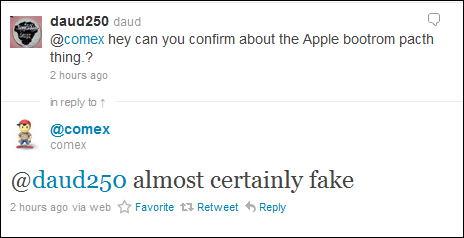 daud250: @comex hey can you confirm about the Apple bootrom pacth thing.?

So, if you have recently purchased new idevice and want to jailbreak it, you can use Redsn0w to get the tethered jailbreak on iPhone 4, iPod Touch 4, iPhone 3GS new bootrom and untethered on iPhone 3GS old bootrom, iPhone 3G and iPod Touch Non-MC models.

I just visited the same forum and found that the user who started the thread has edited his post. It’s here what he says now:

EDIT: I am a moron with a bad USB host controller.