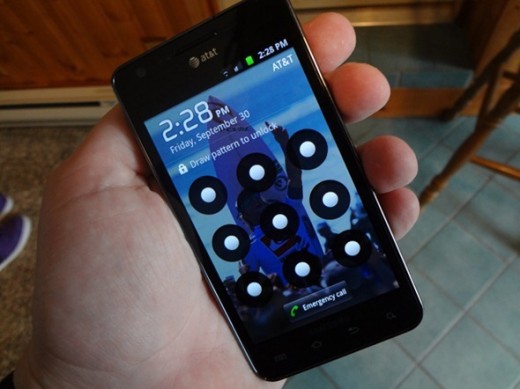 BGR disclosed this flaw yesterday on their site. They said that

Using a simple workaround, the security hole allows anyone to bypass the unlock pattern, which normally denies users access to an Android device unless a preset pattern is drawn on a grid of nine dots spread across the device’s lock screen. The same flaw allows users to bypass PIN security as well. We have confirmed that the flaw exists on AT&T’s Galaxy S II and not on Sprint’s Galaxy S II, Epic Touch 4G, though it is currently unclear if other phone models are affected

The only requirement is that the phone has been successfully unlocked using the proper pattern or PIN at least one time, so the lock cannot be bypassed immediately after the device is powered on. But of course you will have to unlock it for using the device, and after that your device becomes vulnerable.

When Samsung was asked about this issue, a Samsung spokesman said that

The company is investigating the possible security threat but no further comment is available at this time.

Samsung and AT&T are investigating a permanent solution. In the meantime, owners of the Galaxy S II can remedy the situation by re-setting their time-out screen to the “immediately” setting. This is done by going to the Settings ->Location and Security->Screen unlock settings->Timeout->Immediately.