A page dedicated to Motorola Xoom is now live on Verizon Wireless website. As you know Motorola Xoom will be the first device running on Honeycomb, an android version especially designed for tablets.

But unfortunately the first few batches of Xoom which will be shipped on February 24 will not have flash. 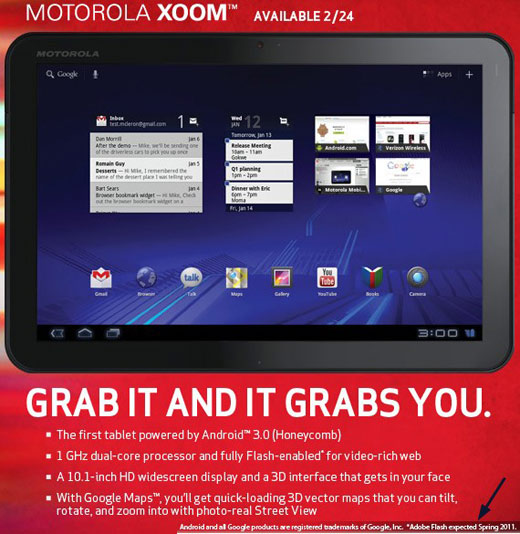 According to engadget, Motorola has confirmed that the missing Adobe flash player will be rolled out later.

“Motorola XOOM will include full support for Adobe® Flash® Player® for accessing the rich video and animations of the web, to be available after launch.”

On the other side Adobe has also posted an update on its blog saying that Adobe Flash Player 10.2 will be made available within few weeks after Honeycomb based tablets are released.

Here is the official update from Adobe:

Adobe will offer Flash Player 10.2 pre-installed on some tablets and as an OTA download on others within a few weeks of Android 3 (Honeycomb) devices becoming available, the first of which is expected to be the Motorola Xoom.

And at last check out Verizon’s first Xoom ad which shows clearly how the company has planned to market Motorola’s new tablet.

Stay tuned to this blog for more news on Honeycomb tablets. You can also join us on our Facebook Fanpage or follow us on Twitter for instant updates.