The jailbreak for iOS 5.1 which was looking very easy in the beginning is taking a long time to be released. Just after ten days of iOS 5.1 release , i0nic managed to jailbreak the new iPad and he also posted a video of his untethered jailbreak. But unfortunately he decided not to release his jailbreak for public. Similarly, pod2g also amused the jailbreak community by showing his untethered jailbreak for iOS 5.1. But even after this early success, the final jailbreak tool is not yet ready because there are a lot of hurdles and problems which the hackers have to address before they decide to make the final product available for general users.

The five exploits out of seven are used to remove the technical issues whereas the 2 exploits are used to address the legal issues like copyright problems. 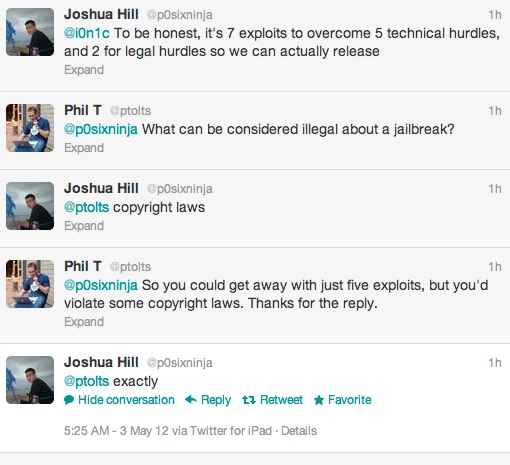 Joshua Hill (@p0sixninja) and any other hacker never mention anything about the release date of upcoming jailbreak. It is still unclear whether they will release the next jailbreak for iOS 5.1 only before the announcement of iOS 6 or they’ll wait for iOS 6. However their gestures indicate they can make it public anytime in this week or up to the end of next week.