According to a tweet by MuscleNerd, the recently released iOS 5.1.1 firmware indicates that Apple knew the unreleased iPad 2/3 and iPhone 4S downgrade technique, however, the folks at Apple research center left this technique untouched in this new version. Now MuscleNerd has decided to include this technique in the upcoming Redsnow 0.9.11 b1 version.

Redsn0w 0.9.11 will allow the users to restore the firmware on your device, downgrade iPad 3, iPad 2 and iPhone 4S to previous iOS 5.0.1 version with saved blobs and stitch the iOS on the fly.

Only those users will be able to downgrade their A5 devices who have saved the SHSH blobs for iOS 5.0.1. The users who updated their devices to iOS 5.1 or iOS 5.1.1 without saving the blobs and the user who purchased A5 device with iOS 5.1+ pre-installed won’t get the downgrade benefit.

At first we thought MuscleNerd used the method developed by iH8sn0w but this is not the case. The upcoming redsn0w version will include a different method which doesn’t have any legal issue at any stage. 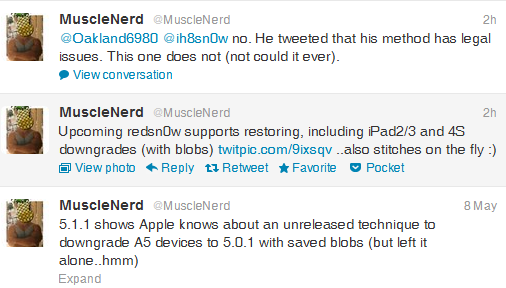 We don’t have information when this new version will be released but considering the screenshot posted by MusclerdNerd it seems its release is around the corner. 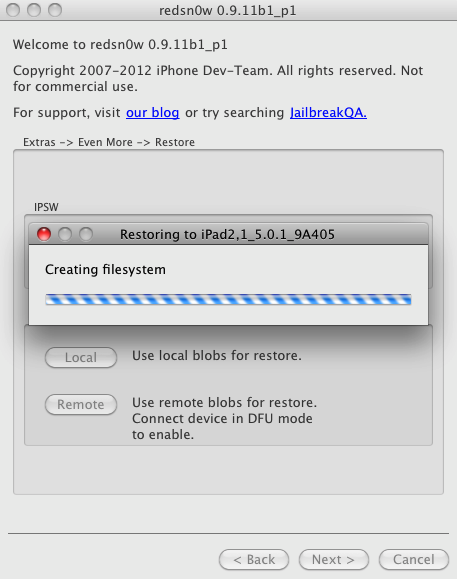 You can get the detailed informational report about Redsnow, its features, functions and its jailbreak method here.