Nokia  one of the most popular mobile Phone manufacturing company introduces its new line-up of phone, the C series.  Nokia already launched a number of famous and popular phones to the C-Series according to the Nokia Cell phone reviews.  Nokia phone has announced another low-budget touch phone in C-Series, naming as Nokia C-5-03, not the same as Nokia C5 mobile phone. 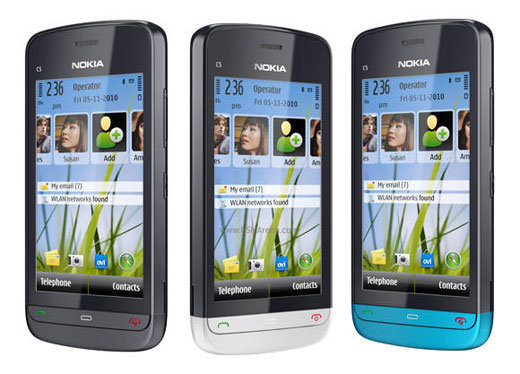 Nokia C5-03 is Symbian^1 touch screen phone, that is packed with all the features and Specs for modern-day phones and also C5-03 Nokia phone is low-budget phone that comes at an affordable price. Nokia C5-03 Symbian phone comes with stylish and eye-catching look along with number of vibrant and variant colors.  C5-03 also supports 5 Megapixel fixed focused camera without LED flash feature and also support video recording feature with not impressive resolution of 640×480 at 15 frames per second . Nokia C5-03 features include 3.2 inch TFT touch screen with resolution of 360 x 640 pixels.  C5-03 specs include features like microSD card support that enhance the internal memory up to 16 GB, also support Quad Band and Tri-band network support, and also come with the features like GPS and Bluetooth support, Nokia Messaging pre-installed, Mail for Exchange support, Ovi Mail, Ovi Store and Ovi Music Integration and support number of programs and software also available from the Nokia Ovi store.

One thing that really surprised everyone in the mobile technology is that the OS operating system used in Nokia C5-03 mobile phone is Symbian ^1 aka S60 5th edition touch edition , why not Symbian ^3 OS as Nokia has launched number of smartphones using operating system Symbian ^3.  Nokia C5-03 is the Low budget Symbian smartphone that comes with surprisingly affordable price at $237. The most surprising part is the 1000 mAh battery introduce with Nokia C5-03 that comes with extremely long standby time up to almost a month with talk time up to 11.5 hrs on 2G and 5 hrs on 3G network. Overall, Nokia C5-03 is really a hot cake smartphone introduce by Nokia mobiles because the C5-03 phone will definitely the one of the cheapest phone that comes with all essential features.

This is a guest post written by Zhid Rafiq who loves to share latst gadegt news on his blog.

View all of Zahid's posts.