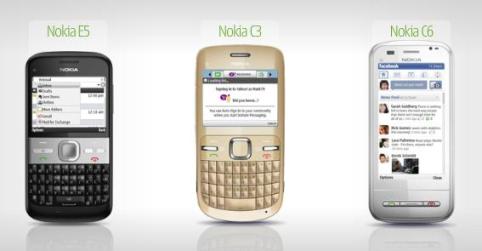 From last two days there were rumors that Nokia was going to launch something new in “Nokia Everyone Connect Event“. Here we go…finally they have announced three new models Nokia E5, Nokia C3 and Nokia C6.

These phones are specifically for those who want to put messaging and social networking tools at one place. All these three models have QWERTY keyboards with access to many email and social accounts.

Here we share some basic specifications, price and expected release date of each device.

Nokia C3 is the first S40 platform based device having QWERTY keyboard. With this phone people can view, comment, update their status and share pictures to their favorite social networks such as Facebook and Twitter.

Release Date: The Nokia C3 is expected to be available in the second quarter of 2010 in a variety of appealing colors, including golden white, slate grey and hot pink.

Price: Nokia C3 will cost about EUR 90 before taxes and subsidies.

Nokia C6 will be based on symbian platform. It will have 3.2 inch touch screen with full slide out keyboard.

Other Specs: It will have 5 megapixel camera with autofocus and flash. Ovi Maps will be preloaded with free walk and drive navigation.

Nokia C6 is expected to be available in the second quarter of 2010 at an estimated price of EUR 220, before taxes and subsidies.

Nokia E5 is also symbian based phone and it is very similar to previously launched Nokia E72 and Nokia E63.

Estimated price of the Nokia E5 is EUR 180, before taxes and subsidies, with expected availability in the third quarter of 2010.