Google’s cloud storage app, Google Drive, is about to go live within few days. TNW reported on its site, after getting the information from some reliable source, that the service would be live on Google domain next week, probably on Tuesday or Wednesday. They also say 5GB free storage option is also coming at the time of release.

After DropBox which provides 3GS space, Microsoft’s SkyDrive that offers 25 GB free storage and Apple’s iCloud having 5GB free option, Google’s Drive will be the next most popular storage option. The important feature of Drive which will make it the unique from others is its ability to integrate with all apps and platforms of Google family. The android users can use it to storage their apps and sync their devices’s data, the office-men can storage their documents on the go and photographers can share their photos across the devices.

Few hours ago TechCrunch has told its readers that Google Drive app for Mac OS X is already available but it is still in sleeping mode, meaning the app could not connect to Google servers. But it was there and John Biggs at TC actually downloaded it, installed on his mac machines and tested it. He successfully logged into the app using his Gmail account.

The download link of Google Drive app has been pulled off since then but surely a new one for general public will be available soon this week. Here are the few screenshots of the app for Mac OS X. 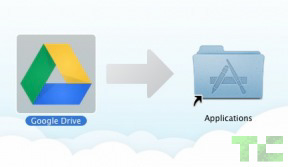