Imp: Pangu 1.1 is now available for iOS 8.1 – iOS 8 also with English language support. This article was originally written when Pangu in the English was released for iOS 7. If you want to know more about Pangu and how it works on iOS 8 or iOS 7, visit our detailed post on it. You can also download the latest version of this tool from there.

The New Changes in Pangu 1.1 for iOS 8 version:

For iOS 7, keep reading on:

Pangu 1.1 jailbreak is now available for Mac OS X users, finally. Earlier this week the windows-only version was release to jailbreak iOS 7.1 and iOS 7.1.1 and the team also promised to release the next version for Mac users too.

There also a good news for those users who found difficulty while operating the chinese version. Now the team has also released the english versions for those who don’t understand chinese language.

The latest version pangu v1.1 also contains a very significant change regarding the exploit used in it. The very first release was based on the exploit discovered by @i0nic but now they have replaced that exploit with a new one. This move looks really strange because they have burnt another exploit which could be used in the upcoming iOS 8 jailbreak. Stefan Esser, who is also known as i0nic, has confirmed the change.

The whole jailbreak process is same as we have mentioned in our previous post but this time you could also find the interface in english language and understand how to perform the jailbreak steps. You can visit the previous post for step by step jailbreak method as we are going to update that article soon with new screenshots. 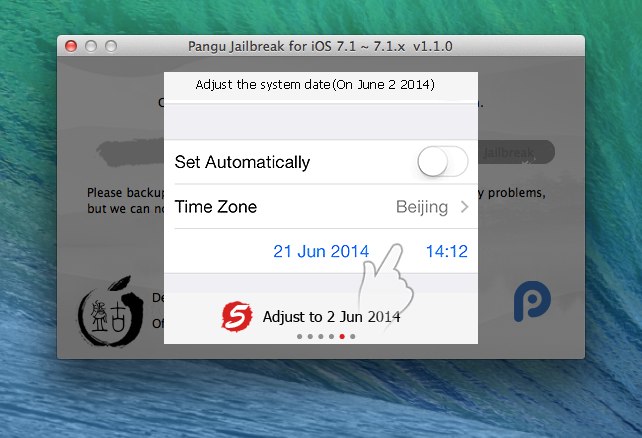 As far as supported iOS devices and iOS versions are concerned, there is no change in it. The following devices running on iOS 7.1 and iOS 7.1.1 can be jailbroken using Pangu v1.1 on Mac and Window.

If you face any problem during the process, please let us know and we’ll try to give a solution to it. But before you go for it, always make a backup of your device.