SSL bug is very serious security threat in which a third party may attack in the middle of secure connection without a warning on the client side. Yesterday Apple released new iOS versions iOS 7.0.6 and iOS 6.1.6 to fix this security flaw in the SSL handling code inside the security framework. Though it is always recommended to upgrade to the latest version especially when there is already jailbreak available for the that, but if you don’t have time now to go through all the upgrading steps, here is a simple tweak which gives the patch on iOS 7.0.5, iOS 7 and iOS 6 devices including the latest 64 bit devices.

It is still debateable how this bug infiltrated in the iOS and even in the Mac OS Mavericks. Some people say Apple intentionally left it in their OSs to let some third party, maybe the NSA, to snoop around. But then there are few facts which devalue such theories or rumors. Anyways, this post is not meant to discuss this vast subject. Here we are going to share with you a simple tweak available in the cydia store which is called SSLPatch.

SSLPatch is a tiny app developed by a famous iOS developers Ryan Petrich, which has many other popular tweaks on his credit. This app lets you fix the issue without installing the latest iOS version on iPhone, iPad and iPod Touch. Here are the step to get it on your iPhone. 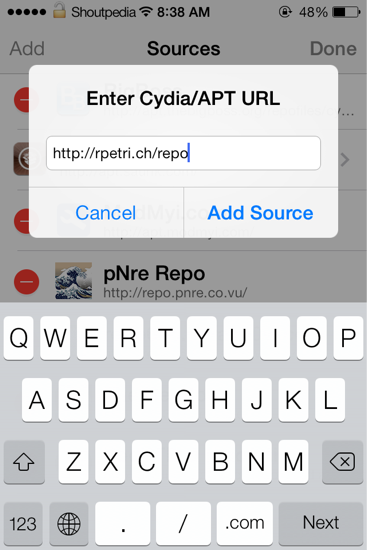 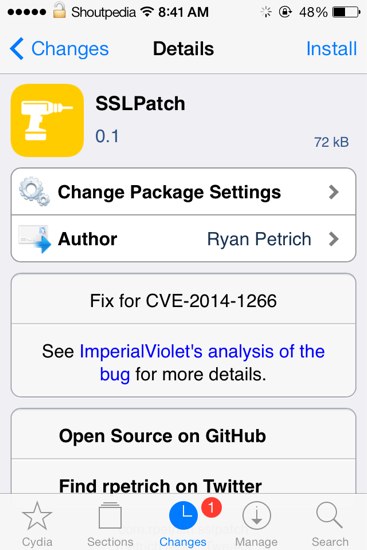 How to Check if You Are Secure?

If you want to check whether your browser is secure now, you can visit gotofail.com. If the browser is still vulnerable to CVE-2014-1266, you’ll receive a red warning and if it is secured, you’d get a green Safe message. This site detects the bug through your browsers only. The other apps such as mail, social networking apps etc might be at risk still until an official patch is not applied. 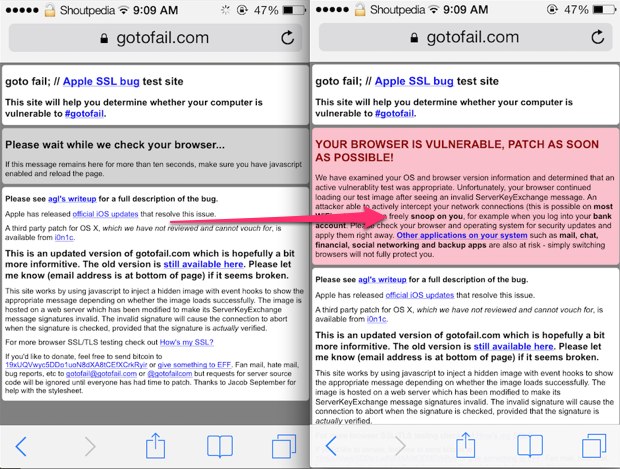 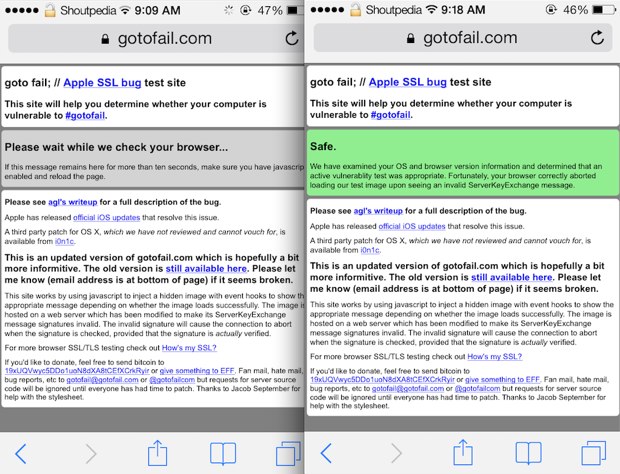 Unfortunately, this bug is also present in OS X operating system. Apple has already promised to include the fix in the next mavericks update, but i0nic has already published a fix for Safari users. The patch is available for 64-bit machines and you’ll have to port it out for 32-bit macs. You can find the more details and even the download link at sektioneins.de.