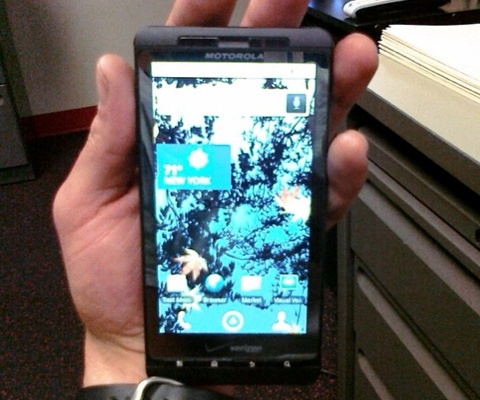 After the iPhone 4G which was lost in a bar and got by Gizmodo, this time an android OS based phone Droid Shadow has lost in a Verizon gym.

This time the story is little different. A gym attendant found a mobile phone in the bathroom of a Verizon executive corporate gym. The guy sent out the pictures of the phone and finally it was confirmed the phone was Motorola Droid Shadow.

Though we don’t know which version of android it will be running on but it is being anticipated it will come with android 2.2.

The rumored release date of Motorola Droid Shadow is June / July. Lets see what we know about this phone in the coming weeks.

Another picture is posted on Howard Forum with little different specifications. According to the details it has 4.1 inch screen, 8GB internal memory, 8GB MMC, TI OMAP 3630 processor, 8MP camera, HDMI out and it is lighter than original Droid.

via Gizmodo and Howard Forums