Do you want to run multiple apps on your iPad screen? Do you love reading the tweets of your friends while performing some other tasks on your iPad? Well, if you want to open the apps in windows just like on your computer and want to get the real multitasking, Quasar jailbreak tweak is your solution.

When I purchased iPad first time, I wanted to install such program which allowed me to read the tweets while performing other things. But I never found any such app, neither in Apple’s AppStore and nor in unofficial Cydia Store. 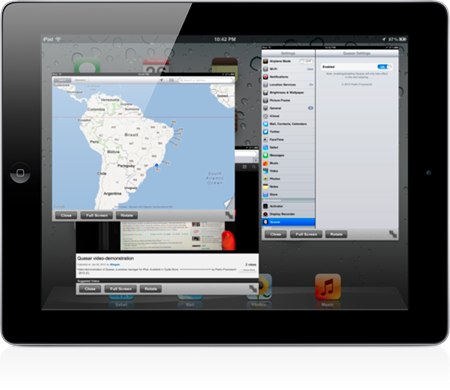 Today when I opened Cydia Store on my iPad, I found a new tweak called Quasar having a tag line “Multi-app Windows Manager for iPad”. After reading the description and watching the demo video of Quasar, it really impressed me and it seemed to me that I have finally found what I was looking for from last one and half-year.

Quasar app brings a true multitasking feature to iPad. Now you can open several app on your homescreen. You can also resize the apps and even open them in fullscreen. The apps can be sent to AppSwitcher to keep them running in background or they can be killed altogether with this app. Quasar jailbreak tweak is also integrated with Notification Center, YouTube, Safari and AppStore. For instance when you will open a link of YouTube video in Twitter app, Quasar will automatically open the YouTube app.

I have already purchased this app and really loving it.

Quasar is a paid app having a price tag of $9.99. And you can get it through BigBoss repo in Cydia Store for jailbroken iPad running on iOS 5+.