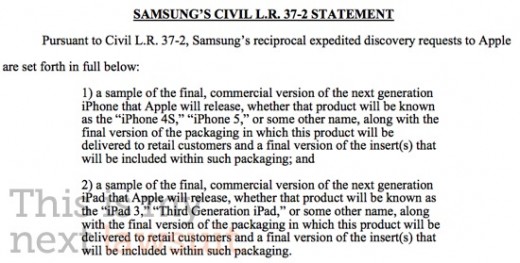 The news originated from Thisismynext, which shows a scanned image of a court document that clearly states Samsung’s reciprocity. Previously, Apple had demanded to see Samsung’s unreleased products. The Koreans have merely reciprocated now.

Samsung claims that it needs to see Apple’s future products because devices like the Droid Charge and Galaxy Tab 10.1 will presumably be in the market at the same time as the iPhone 5 and iPad 3, and Samsung’s lawyers want to evaluate any possible similarities so they can prepare for further potential legal action from Apple. It’s ballsy, but it’s not totally out of the blue..

Basically, Apple sued Samsung claiming that it had copied various design and UI elements in its Galaxy lineup which consists of handsets and the Galaxy Tab. The reason why Samsung wants to see Apple’s future products is because they want to avoid any future incidents of this nature.

However, it is possible that Apple will only allow Samsung’s legal team to see the next generation iPhone and iPad. The manufacturing team would already have an idea of what Apple is going to introduce because we must not forget that Samsung is a component supplier for Apple. Will Apple comply to this demand? That, time will tell.