Finally we are near to get the jailbreak tool for iPod Touch 4G and other iDevices on iOS 4.1. If you remember, we shared a post about SHAttered exploit which was discovered by pod2g and told you that this exploit will be used in the upcoming iOS 4.1 jailbreak on iDevices inluding iPod Touch 4G.

In the meantime, we’ve put @pod2g’s exploit into a beta version of PwnageTool to test the waters. The SHAtter exploit was enough to convince the iPod touch 4G to restore to our custom IPSW. The successful result is shown below!

Although PwnageTool was a useful first test of a full iPod 4G jailbreak via SHAtter, it’s really overkill compared to the faster tools being developed. Its main use in PwnageTool will be for those with iPhone4’s, to allow updates while preserving the baseband and ultrasn0w carrier unlock. In any event, this is another exciting time for iPhone and iPod touch users…the cat and mouse game continues!

Here is the screenshot of full root access on iPod Touch 4G posted by MuscleNerd, a member of iPhone dev Team on Twitter. 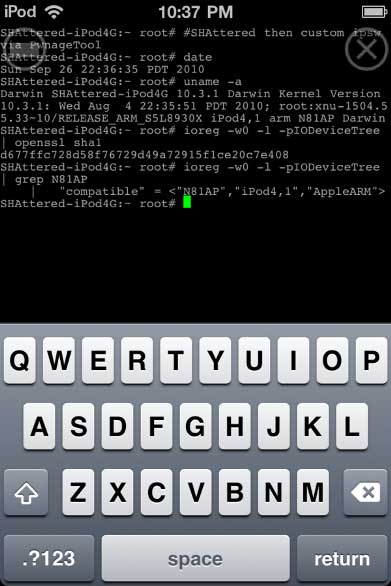 Stay tuned to this information for latest updates on iPod Touch 4G jailbreak on iOS 4.1 using the SHAttered exploit.