Today’s release of iOS 7.0.2 for Apple devices not only fixes passcode lock bugs present in iOS 7.0 but also brings Greek keyboard option in order to strengthen and give more options for a hard-to-know passcode.

There were two passcode bugs present in the previous version. One allowed the intruders to access the recently opened apps, while also providing the access to the photo share feature. While using the second hack, any user could use the phone app to call anyone without entering the passcode. 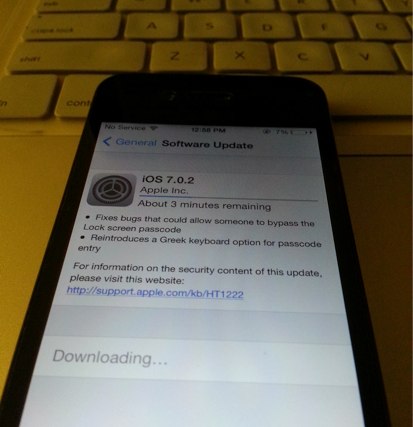 Now coming back to the original question, it is always better to install iOS 7.0.2 on your devices even if you don’t allow anyone to touch your phone. You may drop it, forget it somewhere or get stolen. Anything can happen. So it’s better to be on safe side. And thanks to iOS’s OTA option, now it’s matter of few minutes to upgrade to the latest version without needing an access to PC. All you have to find a reliable WiFi connection and use the built-in Updater.

MuscleNerd has said, through his twitter handle, to all those who wanted to stay on iOS 7.0 for jailbreak, that they could install this upgrade as it didn’t has anything new except the bug fixes.

Unusual level of detail in 7.0.2 security update notice http://t.co/ZWDFtzdT5J (for PR reasons?). It’s not a JB vector so updating is fine.

In case you didn’t get the update notification in the settings app yet, you can go to Settings -> General -> and tap on Update in order to manually force the internal update to find the latest updates.

Those looking for clean restore, they can find the direct download links mentioned below. After downloading the relevant iOS version for your device, open iTunes and restore it. You can find the detailed post about upgrade here.