SHSH Blobs extracting utility will extract the blobs from within iOS files and won’t contact Apple servers. This utility will be very useful for those iPhone users who are still using the old iOS version and didn’t update their devices to latest firmware.

Here is the conversation between MacHackPC and iH8sn0w on twitter. It is just to remind you that iH8sn0w has already developed many tools for jailbreakers and unlockers e.g., Snowbreeze, iREB, f0recast, iDetecor etc. 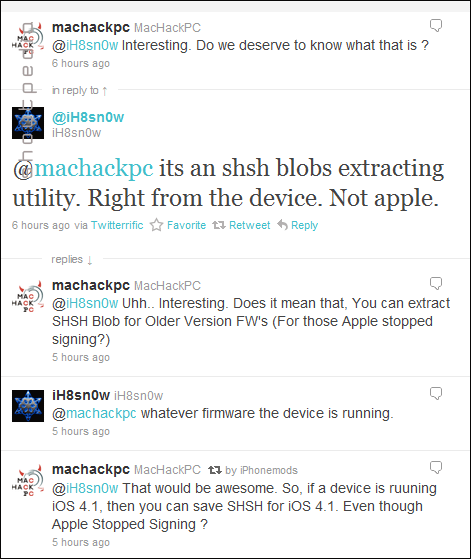 machackpc: @iH8sn0w Interesting. Do we deserve to know what that is ?

iH8sn0w: @machackpc its an shsh blobs extracting utility. Right from the device. Not apple.

machackpc: @iH8sn0w Uhh.. Interesting. Does it mean that, You can extract SHSH Blobs for Older Version FW’s (For those Apple stopped signing?)

machackpc: @iH8sn0w That would be awesome. So, if a device is running iOS 4.1, then you can save SHSH for iOS 4.1. Even though Apple stopped signing?

For those who don’t know SHSH blobs are very important for iOS downgrade process and for present and future untethered jailbreak methods.

Stay tuned to this blog for more information about this utility. You can also join our Facebook fanpage or follow us on Twitter for latest updates.

Note: If you have updated your device to latest iOS firmware, you can use TinyUmbrella to extract and save the SHSH blobs.