Sn0wbreeze 2.8 b1 has been released bringing tethered jailbreak support to iPhone 3GS, iPhone 4 (both CDMA & GSM), iPad 1, iPod Touch 3rd and 4th generation running on iOS 5 beta 1. It is to remind you that Snowbreeze works on Windows machines only, but thanks to MuscleNerd who has already released an updated version of Redsn0w to jailbreak iOS 5 on Mac machines.

However, there is a big difference between these two jailbreak tools: Redsnow is used after you update/restore your device to iOS firmware you want to jailbreak while Sn0wbreeze cooks a customized and jailbroken iOS firmware and then you restore to this custom firmware. 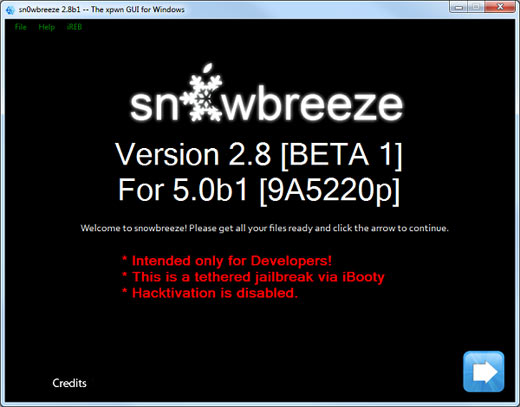 Snowbreeze 2.8 is released for developers only, for those who have an account with Apple’s Developer Account. Here is the official changelog from iH8snow, the developer behind sn0wbreeze:

Note: All those users who rely on unlock must stay away from iOS 5 beta release otherwise they will lose the unlock ability making your iPhone only a touch device.