Snowbreeze 2.8 beta 6 is now available for download from iH8sn0w’s website. This updated version not only jailbreaks the recently released iOS 5 beta 6 version but it also removes the UDID Developer check.

As you know the beta releases of iOS and iTunes can be downloaded from Apple’s Developer site only if you have a developer account with Apple which costs $99 per year. Moreover, the UDIDs of the idevces which you want to update to iOS 5 beta 6 must also be registered on Apple’s servers. 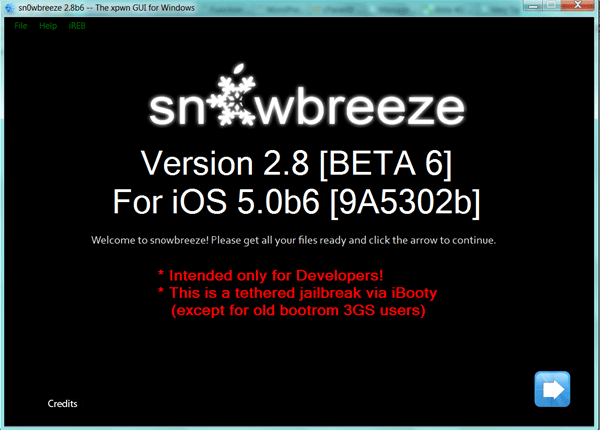 But the just released Sn0wbreeze 2.8 beta 6 removes this UDID check while building custom iOS 5 beta 6 firmware and also disables beta timer which puts your device into recovery mode and asks you to install new version when the beta expires.

Sn0wbreeze 2.8 beta 6 also keeps the baseband of the idevice preserved while building custom firmware allowing all the users, who are still on unlockable baseband,  to unlock their idevices with Ultrasn0w.

It is to be noted that Sn0wbreeze 2.8 beta 6 provides tethered jailbreak at present. After every shut down you will have connect your device with PC and run a simple iBooty program to get successful reboot.