What with hundreds of new tweaks coming up everyday, Cydia has become a gold mine for the iOS. The iOS has become a most useful platform with all app developers working to  improve it. Many great features of other OS have been available for iOS through these jailbreak tweaks. Though Apple has tried implying some of the Android/Windows Phone features to its iOS but has stopped from going too far in fear of a potential court case. 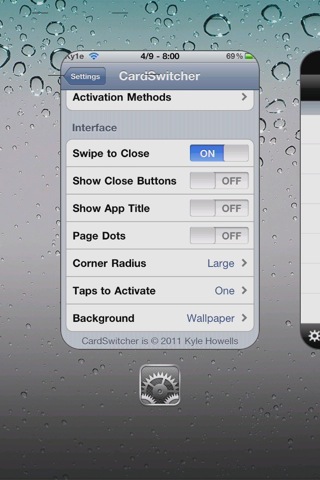 Well, that little hole is filled by the third-party app developers. Apple has also tried improving its multitasking feature, but has not got much good results. Its multitasking bar is still not good enough and lacks some qualities. Apple seems to be planning a better multitasking feature for the iOS 5, but why wait when you can use a tweak to improve the multitasking in your idevice, with the help of “CardSwitcher”. This app allows you to switch between the apps in your iPhone or iPad same as changing tabs in a browser with no difficulty.

Same as in the case of most of the tweaks from Cydia, there is no springboard icon, so you have to access the CardSwitcher from the settings. The author/developer of this app is iKy1e (Kyle Howells). This app is available on the BigBoss repo at a reasonable price of $1.99. But you must have a jailbroken iPhone to get this tweak.

The real sad thing is that this tweak is not available for iPads. So, those waiting for tabbed multitasking feature for an iPad will have to wait for a while. So, keep logged on our site, and we will let you know if you can get this tweak for your iPad.

Here is the demo of this new tweak “CardSwitcher”.