Even before the official release, the HTC Mozart’s Build of Windows Phone 7.5 “Mango” has leaked to the web. Mango version of Windows Phone 7 is available for developer only and its public version is yet to release any time in this month.

Well HTC certainly seems to be putting all hands on deck. Just a few days ago, it announced the Windows Phone 7 HTC Titan & HTC Radar. And just a day ago, pics and specs of the new upcoming Android, HTC Amaze 4G (Ruby)  leaked too. So HTC certainly seems to be working hard on the Android and Windows Phone platform. However, Mango for Mozart is not released by HTC itself, though the final source might be any one working with HTC.

The most significant difference in this WP7 Mango is that, the OS is developed especially for a specific handset, the HTC Mozart. So simply, this is the Mango edition for Mozart.

Microsoft has made it clear that, the Mango OS will be released before long, and it is in the hands of the OEMs so we have just got to wait for it. 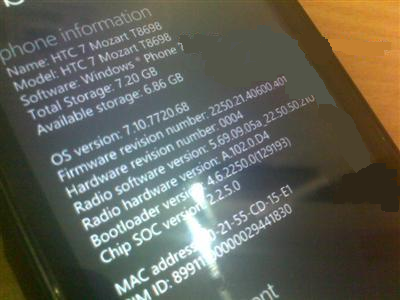 Now, if you are a risk-taking person or don’t care much, and want to download this software no matter what happens. Then, have it your own way and click here . We here at Shoutpedia, neither encourage nor discourage you to get this software and therefore would not be responsible for any damage to your device.

Now, the thing to do is wait for the official release, while those who already own a HTC Mozart and want to take the risk, can upgrade now.