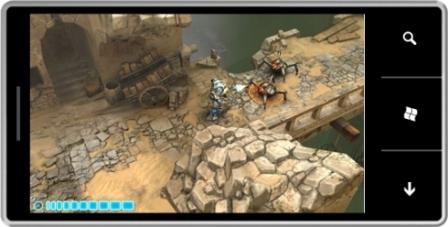 Finally Microsoft has recognized the importance of games for hand-held devices. They have shown the same importance in the newly launched windows phone 7 series OS for mobiles.

Games and 3D graphics are one of those characteristics in this OS that will increase the success rate of windows phone 7 series mobiles in future.

We all know that iPhone is at top in providing the excellent performance and 3D graphics with a lot of games available at App Store. Microsoft seems to have understood the importance of this area and now they are trying target the youth and gamers directly via mobile phones.

Previously it has been mentioned that Xbox Live is coming to Windows Phone 7 Series and this time The Harvet is demoed which can be played on the computer, the mobile and on  Xbox 360 via Xbox Live Arcade with the same saved data.

The Harvet looks very cool in Windows Phone 7 Series. Watch a sample preview of the game in this video.