iPhone 5 is coming in October. That is almost certainly confirmed, and is would be accompanied by the iPhone 4S, iCloud and surely the iOS 5 too. iOS 5 is believed to be bringing a lot of new features.

There has been a strong rumor, or well a confirmed report that Apple is holding a media event on October 4th to unveil the iPhone 5, and to release iOS 5. Usually Apple releases the major iOS version prior to launching a new iPhone model. So, it looks like that we would have the iOS 5 in our hands by 10th or 11th October . Twitter is trying to get involved in the iOS as it has announced two developer conference to discuss Twitter integration in the iOS. 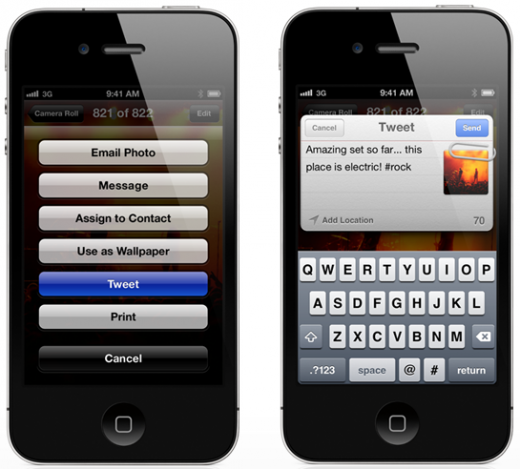 The first conference is to be held on the 10th of October, while the second on the 12th. Apple has even told its AppleCare division to expect a high influx of iOS 5-related questions on October 10th.

There’s a lot going on in the ecosystem and we’d like to take this chance to share the highlights with you – including the latest developments with the platform, areas of opportunity that we’re seeing, and a heavy focus on the iOS 5 Twitter integration for developers.

So this confirms that the iOS 5 will be available for public by the 10th as it is most unlikely for Twitter to hold a media event for iOS 5 before the release of the software.

A demo of Twitter integration into iOS 5 was presented months ago to developers. This function will basically allow an iOS user to tweet directly from some certain apps, or share things on twitter directly through the iOS.

It looks like that the iOS 5 has many things for us in the bag which will only be finally disclosed to us after the public release. So just hang on for a while, and see what happens.