Two types of users can be included in this list … those who have purchased iPhone 4 with preinstalled iOS 4.2.1 and those who have accidentally upgraded their devices to iOS 4.2.1 without preserving the baseband.

Here is a good news for all those who are having a locked iPhone 4 and can’t use the SIM card other than the one from officially supported carrier.

Sherif Hashim, a well know hacker who works on iPhone baseband hacking to find new exploits, has confirmed over twitter while replying to a user that the exploit which he has found is working on both baseband 02.10.04 and 03.10.01 on iPhone 4. 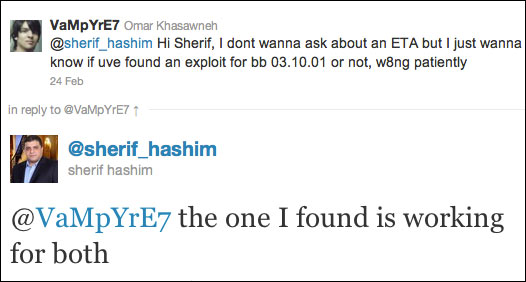 VaMpYrE7: @sherif_hashim Hi Sherif, I dont wanna ask about an ETA but I just wanna know if uve found an exploit for bb 03.10.01 or not, w8ng patiently

sherif_hashim: @VaMpYrE7 the one I found is working for both

iPhone 4 unlock for the said basebands will be available in the form of Ultrasn0w. An updated version of Ultrasnow, “Ultrasn0w 1.3”, will be released under the umbrella of iPhone Dev Team to support iPhone 4 unlock.

Now the question is “when will Ultran0w 1.3 be release?”.

iPhone Dev Team has already made it clear that no unlock will be released until iOS 4.3 is out, indicating the new unlock tool may support iOS 4.3 as well. Below is the screenshot of MusclerNerd’s tweet from archives. If you don’t know, MuscleNerd is the key member of iPhone Dev Team.

We have already shared a rumor that iOS 4.3 will go public next week just before or just after Apple’s iPad 2 Media Event starts. So, it’s only a matter of few day now.

Stay tuned to this site for more information on iOS 4.3 and Unlocks.