This new app “Universal Video Downloader” has become one of my favourite app on my iPhone. I am using it since the day it was launched and I found it one of the best apps to download almost any type of video. I have already used it on some popular sites which I visit daily and found it flawless. Above all it integrates well not only with the native YouTube app but also with the recently released Google’s official YouTube app.

Moreover, it also works on Safari. In short you name the app and its integration is there. I just downloaded few videos from the iPhone Facebook app. 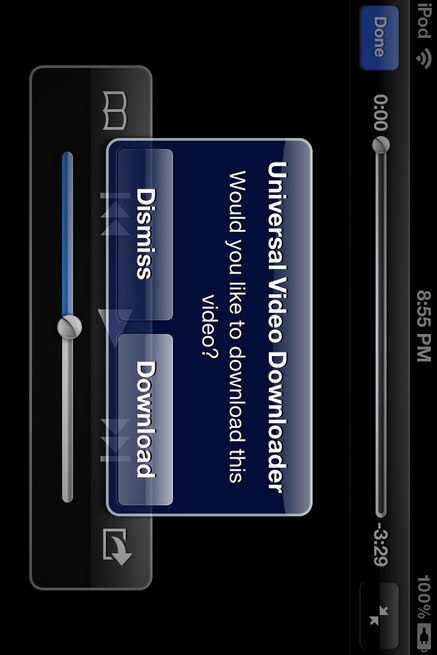 Here are some other features which you can set according to your desire and need. After installation, when you launch Universal Video Downloader, you see five tabs, namely Videos, Downloads, Apps, Settings and Help. 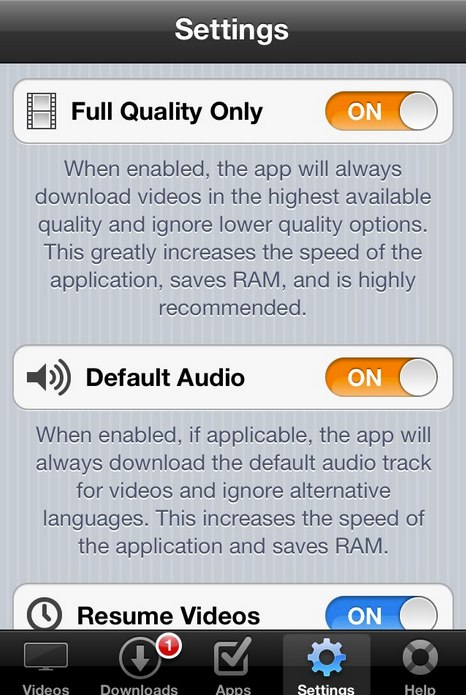 When you tap on Video tab, you will see the videos you have downloaded using this app. As you just installed it, so this tab will show nothing :).

The second tab is “Downloads”. It tells you what video is downloading now and how much time/size is remaining. You can also pause/resume the video by tap on it.

Under “Apps” you select the apps in which you want to enable Universal Video Downloader. If you want to integrate it with few apps like Facebook, Safari, YouTube etc, just move the slider to “OFF” position and select the desired apps from the list.

The “Settings” option allows you to select the Video quality, default audio format, on/off resume feature and set the downloads alerts on/off. At the last is the “help” section.

Oh, did I mention above that Universal Video Downloader App is available through Cydia store only? In fact it can be installed on jailbroken devices only. If your device is still un-jailbroken and running on iOS 6, you can go to our iOS 6 jailbreak guide. The feature which makes this app unique from other free video downloader apps is that it works with almost every app.

Please be aware that, while this app is compatible with a large number of other applications, there are two notable exceptions with respect to compatibility. First, the app is not currently able to download files specified in QuickTime reference movies (video files with embedded URLs). However, it WILL download most video streams, even though they have embedded URLs as well. Second, some third-party apps use custom video players and/or custom verification systems to restrict the accessibility of video content. Because of this, the app may not be able to download video content from some of these apps.