Promised by Steve Jobs in the beginning of this month, a new version of iOS, iOS 4.1, has been rolled out for iphone 4, iPhone 3GS, iPhone 3G, iPod touch 2G, and iPod Touch 3G. The newly announced iPod Touch 4G will be shipped with pre-installed iOS 4.1. For all those who rely on jailbreaking or unlocking, don’t update iPhone to iOS 4.1 until and unless iPhone Dev Team releases a new version of jailbreaking tool.

However if you don’t rely on jailbreaking/unlocking but you expect doing so in near future, here is a simple method which won’t upgrade the baseband 1.59.00 to 2.10.4 after updating your iPhone 4 to iOS 4.1.

It is to remind you that keeping the old baseband 1.59.00 will able you to downgrade to previous iOS version if you have already saved your SHSH blobs.

Step 1: Download the latest TinyUmbrella version for Windows or Mac.

To do this, press and hold left “alt” (option) button on Mac (Left “Shift” button on windows) on the keyboard and then click on “Restore” (Not “Update” or “Check for Update”) button in the iTunes and then release this button.

This will prompt you to select the iOS version. Select iOS 4.1 which you downloaded in step 2.

Step 5: During the restore process, you may see 1004 error (firmware update failed) but ignore it.

Step 6: At this step your phone will show a message “Connect to iTunes”. In fact you phone has stuck in recovery mode. To get rid of this message, click on “Kick Device out of Recovery” on tinyumbrella screen as shown below. 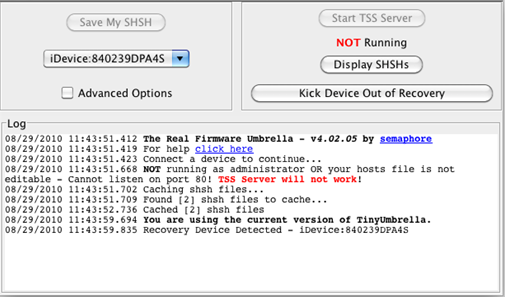 Step 7: You phone will restart and you will see the new iOS 4.1 on your device without changing the baseband 1.59.00. 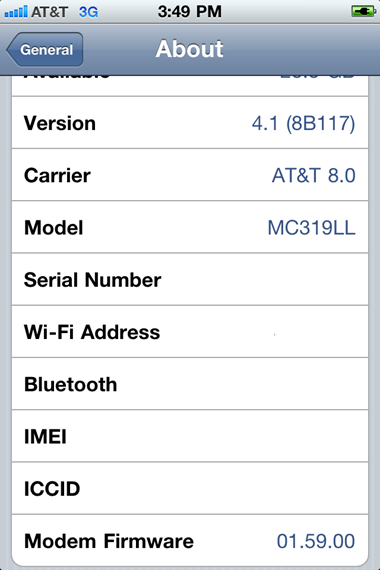