Now you can stream your faviourite TV channels on your iPhone, iPod Touch and iPad without installing any application.

FilmOn is a new web-based service for idevices that lets you to stream more than 25 channels including CNN, BBC, Bloomberg, NBC and ITV. Some channels are available in HD too. 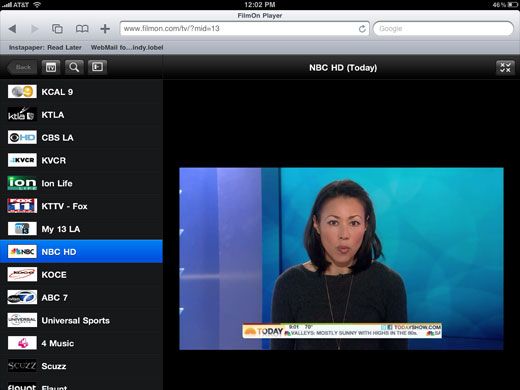 On the other side the TV networks are not happy and they have already file a lawsuite against the company but Aki David, the man behind FilmOn is confident and believes that the service is operating legally and will continue its operation.

As you know that services doesn’t require any app, so all you have to do is to visit the webpage of filemon.com on your iPhone, iPad and iPod Touch to watch the TV channels live.

UPDATE: Ivi’s Hal Bringman wants us to know that in addition to Seattle, his service also offers streams from New York broadcast stations, and will start offering from L.A. this weekend. Up next–Chicago and Philadelphia. Bringman says his company also has an iPad app in the works, but that one will require a $4.95 monthly fee.