Youtube is without a shadow of a doubt the most popular video sharing website. It’s hard to imagine the success it has garnered in such a short span of time. Youtube has been experimenting with a live streaming service for some time but it was a limited service and was confined to specific events such as concerts and documentaries. Youtube live was officially unveiled some time back and caused great excitement amongst Youtube fans as the prospect of sharing live broadcasts was simply drool worthy. 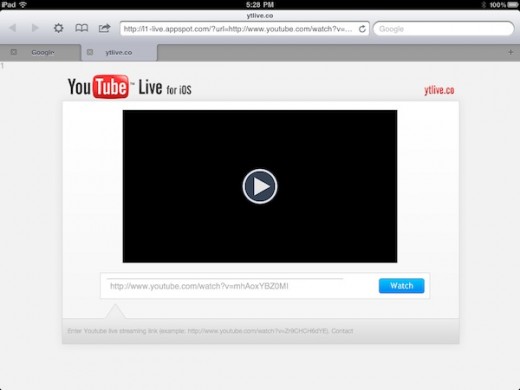 The biggest downside turned out to be for the users of mobile devices such as iPhone, iPad and iPod touch as Youtube Live is totally dependent on flash and it is no secret that iOS does not support flash.

A web app by the name of YTLive promises to ease the ordeals of Users. What it essentially does is that it process’s the live flash based video stream on the fly and converts into a iOS friendly format so the video can then be watched on iPhone, iPad and iPod touch. Watching the converted video is essentially just tap and play.

Note: There is a downside of this service’s increasing popularity. As more and more users are accessing the site, it is unclear whether YTLive’s servers can handle the enormous traffic as few reports of denial of service have been received. But hopefully it would turn out to be temporary.[via: Macstories]