Microsoft Netherlands finally dropped the curtain! In a post on Microsoft Dutch blog, the company revealed the secret that Windows 8 will be released after 3 years of Windows 7 release.

Windows 7 celebrated its first birthday on October 22, 2010 and if everything goes according to the Microsoft’s plans, we can expect Windows 8 in the last quarter of 2012. 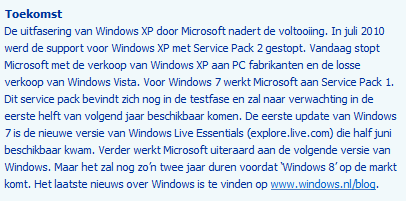 And here is the translation of above paragraph with Google Translator:

The phasing out of Windows XP, Microsoft is nearing completion. In July 2010, the support for Windows XP with Service Pack 2 stops. Today Microsoft will stop selling Windows XP to PC manufacturers and the aftermarket sales of Windows Vista. For Windows 7, Microsoft Service Pack 1. This service pack is still in the testing phase and is expected in the first half of next year available. The first update of Windows 7 is the new version of Windows Live Essentials (explore.live.com) became available in mid-June. Furthermore, Microsoft is of course the next version of Windows. But it will take about two years before “Windows 8 ‘on the market. The latest news about Windows is available at www.windows.nl / blog.

Windows 8 will definitely bring some new features and enhancements. Earlier this year a leaked document showed that Windows 8 will include a new app store for windows. The rumored enhancements are better startup time, sleep time and power efficiency.