If you are following the rumors over the past week, this shouldn’t be a surprise for you. Today Microsoft and Nokia have announced plans for broad strategic partnership to combine the respective strengths and to build a new global ecosystem.

You can read the full press release after the break but the whole situation can be summarized in two points: 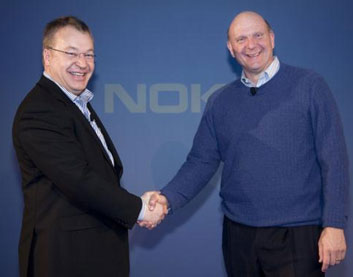 London, UK – Nokia today outlined its new strategic direction, including changes in leadership and operational structure to accelerate the company’s speed of execution in a dynamic competitive environment.

Major elements of the new strategy include:

– Plans for a broad strategic partnership with Microsoft to build a new global mobile ecosystem; Windows Phone would serve as Nokia’s primary smartphone platform.
– A renewed approach to capture volume and value growth to connect “the next billion” to the Internet in developing growth markets
– Focused investments in next-generation disruptive technologies
– A new leadership team and organizational structure with a clear focus on speed, results and accountability

“Nokia is at a critical juncture, where significant change is necessary and inevitable in our journey forward,” said Stephen Elop, Nokia President and CEO. “Today, we are accelerating that change through a new path, aimed at regaining our smartphone leadership, reinforcing our mobile device platform and realizing our investments in the future.”

Nokia plans to form a strategic partnership with Microsoft to build a global mobile ecosystem based on highly complementary assets. The Nokia-Microsoft ecosystem targets to deliver differentiated and innovative products and have unrivalled scale, product breadth, geographical reach, and brand identity. With Windows Phone as its primary smartphone platform, Nokia would help drive the future of the platform by leveraging its expertise on hardware optimization, software customization, language support and scale. Nokia and Microsoft would also combine services assets to drive innovation. Nokia Maps, for example, would be at the heart of key Microsoft assets like Bing and AdCenter, and Nokia’s application and content store would be integrated into Microsoft Marketplace. Under the proposed partnership, Microsoft would provide developer tools, making it easier for application developers to leverage Nokia’s global scale.

With Nokia’s planned move to Windows Phone as its primary smartphone platform, Symbian becomes a franchise platform, leveraging previous investments to harvest additional value. This strategy recognizes the opportunity to retain and transition the installed base of 200 million Symbian owners. Nokia expects to sell approximately 150 million more Symbian devices in the years to come.

In feature phones, Nokia unveiled a renewed strategy to leverage its innovation and strength in growth markets to connect the next billion people to their first Internet and application experience.

Alberto Torres has stepped down from the management team, effective February 10 to pursue other interests outside the company.

The renewed governance will expedite decision-making and improve time-to-market of products and innovations, placing a heavy focus on results, speed and accountability. The new strategy and operational structure are expected to have significant impact to Nokia operations and personnel.

New company structure
As of April 1, Nokia will have a new company structure, which features two distinct business units: Smart Devices and Mobile Phones. They will focus on Nokia’s key business areas: high-end smartphones and mass-market mobile phones. Each unit will have profit-and-loss responsibility and end-to-end accountability for the full consumer experience, including product development, product management and product marketing.

Smart Devices will be responsible for building Nokia’s leadership in smartphones and will be led by Jo Harlow. The following sub-units now in Mobile Solutions will move under Smart Devices:
– Symbian Smartphones
– MeeGo Computers
– Strategic Business Operations

To support the planned new partnership with Microsoft, Smart Devices will be responsible for creating a winning Windows Phone portfolio.

Markets will be responsible for selling products, executing compelling marketing and communications, creating a competitive local ecosystem, sourcing, customer care, manufacturing, IT and logistics across all Nokia products. It will be headed by Niklas Savander.

NAVTEQ, an integral part of Nokia’s location and advertising business, will be headed by Larry Kaplan, and continue as a separate reporting entity.

The CTO Office will be responsible for Nokia’s technology strategy and forward-looking technology activities, including Nokia Research Center. It will be headed by Rich Green.

Design, responsible for Nokia product and user experience design, will be led by Marko Ahtisaari.

The CFO Office, responsible for all financial activity, will be headed by Timo Ihamuotila.

Corporate Development, responsible for driving implementation of Nokia’s ecosystem strategy and strategic partnerships, will be headed by Kai Oistamo.

Human Resources will be led by Juha Akras.

Legal and Intellectual Property will be led by Louise Pentland.

Nokia Siemens Networks continues in the Nokia Group as a separate reporting entity.