Well, Microsoft finalized its Windows Phone 7.5 update last week, but the leaked screenshots of next update have started appearing in the wild. Windows Phone Tango, which is reported by many sources to be the minor release before the next generation Windows Phone OS codenamed Apollo, will include a global search option. 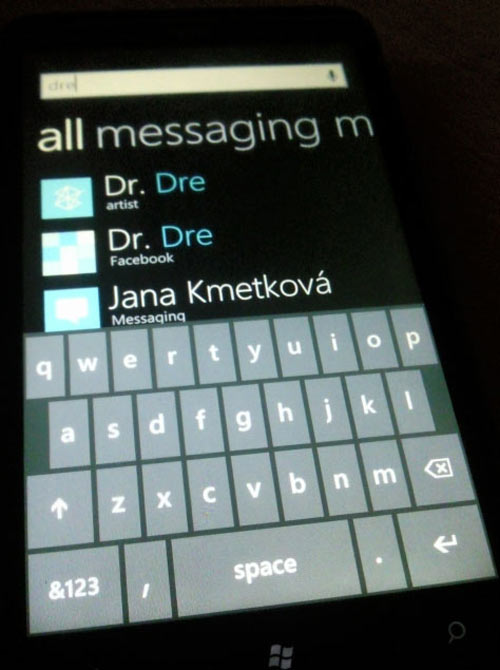 This global search option will allow users to find the content e.g., contacts, email, messages etc using a single search box. If this build-in search engine doesn’t find the relevant information, it will try to fetch the required info from internet.

The first screenshot of Tango build posted on a Slovakian forum is being confirmed as genuine by many tech blogs. WPCentral reports that a moderator at the site, named Snake, posted the following description of build 8220 Tango:

“Content Search (Build 8200 Tango), it more or less works, first it´s finding content directly on the phone, and then on the web, the good thing is that Facebook pages work now (finally), i don´t know about twitter/LinkedIn, i haven´t them synced up, voice activated searching is also possible, similar function what iPhone has.”

The build is expected to be an interim release between Windows Phone Mango and the next-generation of Windows Phone, codenamed “Apollo.” The jump in build strings would explain a split in development, keeping the 77xx trees available for future 7.5 updates and improvements. We’re unable to immediately verify the report but an image posted with the build description does appear to be genuine and suggests that Microsoft could be building in full device search into a future Windows Phone Update.

We don’t have any official update on this new leaked screenshot yet but we will keep you updated as we get new updates.